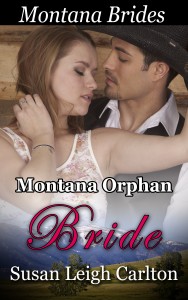 I have just published another in the Montana Brides series, titled “Montana Orphan Bride“.
Continuing in my recent style, this is a clean, sweet, and tender western romance set in frontier Montana. Several characters in previous books appear here. This novella stands alone and you won’t miss anything if you haven’t read the other books.
It is the story of Jack Pinckney a young man with a burning desire to become a doctor. He showed no interest in any of the Pinckney family enterprises, and after graduating number one in his high school class, entered Johns Hopkins University Medical College in Baltimore. After graduation, and his residency, he set up his practice in Bitter Root, Montana, and was enthusiastically welcomed by the locals.
Jack was providing pro-bono medical treatment to an orphanage when he met Shelby Hanson. Her parents had been brutally murdered in an Indian raid when she was three, She was two months shy of her eighteenth birthday and still living in the orphanage when Jack met her.
Jack uncovered a scheme by a local businessman to sell the orphanage children into servitude. The attractive females were sold to brothels or offered at auction to the highest bidder. Such an auction was planned for Shelby.
Shelby developed a crush on Jack, but he pointed out the seven year difference in their ages precluded a relationship. Can Jack rescue Shelby from the fate Rance Larson has planned?
Is the age difference between Jack and Shelby too great? Read about the actions taken by Jack and his family to thwart Larson’s plans. Read what happens to Shelby when she turns eighteen.
If you like western romance, you might also like The Montana Bachelor’s Bride. It is also a clean, tender love story about a mail-order-bride. You can click on the name or the URL below to be taken to the Amazon web page.

Thank you for your interest in my books. I appreciate the support.