↓
Home Menu ↓
Home→Waiting For Her Cowboy 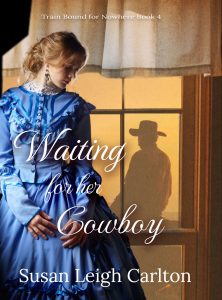 “Waiting For Her Cowboy” is the fourth book in the “Train Bound For Nowhere” series. It is the story of Caleb, the son of Christine, the mail order bride, who married Trace Jennings in Book 1, and then ran off with a drummer, leaving Caleb behind. It follows him from when he was eight years old, through his college and Army service and subsequent marriage.
A sweet, historical romance with 300+ pages.
Caleb was abandoned, and later kidnapped. Before he was nine years old.
Clara saw it all, and identified the kidnappers.
Feeling unworthy, he turns his back on her friendship and love.
Has he thrown everything away? Can he get it back?

All of the books are in Kindle Unlimited, and are free to download and read for KU members. The first three books in the series are:
On a Train Bound for Nowhere
Julia’s New Life
Sophia: The Orphan’s Mother