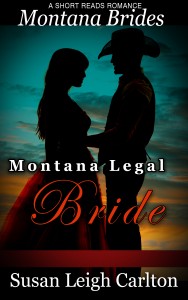 Montana Legal Bride is a clean, sweet, and tender western romance set in frontier Montana, and Southern California. Several characters in previous books appear here. This novella stands alone and you won’t miss anything if you haven’t read the other books.
It is the story of Jamie Pinckney a young, goal oriented woman with her sights set on becoming a lawyer. She enrolls in Stanford University because the Harvard Law School does not admit women. She is determined to reach her goal and is focused on completing her education.
Jamie achieved her goal, and passed the California Bar exams. After breaking off a relationship that was going nowhere, her brother Jack introduced her to Micah Williams, the brother of his best friend. The first time Micah’s hand touched her hand it set off fireworks. Before her three week visit was over, they had fallen in love. Her previously failed relationship caused her to ask for time to be sure her feelings were true and not a rebound. Two days after she was home, and a call from her former boyfriend, she was sure.
Are the feelings real? Will she have the courage to act on them, or will she play it safe?
Many of the characters are carryovers from the popular Montana Orphan Bride
Purchase Montana Legal Bride here.