Mama Was A Mail Order Bride 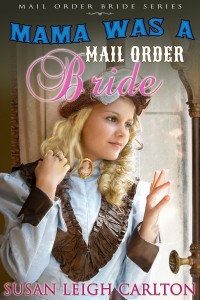 A western romance novella of about 28,000 words
This is the story of Rance Kendall, a successful ranch owner in the Cheyenne, Wyoming Territory, in 1876 timeframe. After he finds a two year old girl whose family is massacred by the Oglala Sioux, he has to face the fact he is thirty-two years old, unmarried, and no prospects, he needs the love and companionship of a wife, and the two year old he has taken in needs a mother. He decides to place an ad for a wife.
In Elmira, New York, Amanda Taylor catches the man who has courted her for over five years, cheating on her. As a thirty year old school teacher, she is about to resign herself to the life of a spinster school teacher, when she chances upon a copy of The Matrimonial News, She decides to place an ad, but tears up the letter. When she confronts her desperation, she places the ad. She faces the disapproval of her family.
Is this her last chance at a normal life? Does she dare take the step? She decides the fear of the unknown beyond Elmira is too much to overcome and declines an invitation to meet.
What will Rance do? He has several other replies to his ad, but has held off awaiting number 9508’s decision. He is stunned when she turns him down. What spurs him to not accept the negative reply?
An emotional (for me anyway) time involves Laurie’s sister, Abby, a concert pianist was on tour in Europe when World War 1 started. The family fears for her safety. When Laurie turns down the aisle at her wedding and discovers Abby is the one playing The Wedding March. It was a surprise arranged by Amanda and Abbie, who only arrived back in Cheyenne the day before.
I hope you enjoy it. It is free on Amazon Thursday, September 18.
Click here to download.