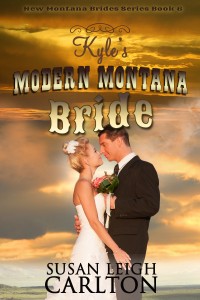 Kyle’s Modern Montana Bride is the latest in The New Montana Bride Series.
The description:
This is a western romance novella set in Montana, in the 2008-2012 time frames. It is the story of Kyle Thompson, the son and heir apparent of a wealthy Montana rancher.
Kyle grew up loving to fly. He soloed in the family owned Cessna 182 on his sixteenth birthday. He obtained his private pilot’s license on his seventeenth birthday; He was also certified to fly the twin engine Cessna 310, owned by the ranch.
In November, 2003, the senior senator from Montana, nominated Kyle for one of his two allocated appointments to the US Military Academy at West Point.
He expected his girlfriend, Ashley Stewart, to be as ex-cited about the appointment as he was. She was not, and told him in no uncertain terms she did not want, and would not have a boyfriend two thousand miles away.
West Point won out, and when he entered the US Military Academy as a plebe, Class of 2008, he no longer had a girlfriend.
After his mandatory six year commitment, was up, Kyle returned to Montana, where he planned to resume a normal life. This proved not to be the case.